Audiovisual performance and lecture (in German)

›Is DADA still alive? Is DADA a philosophy, a politics, a state religion? Is DADA actual energy? Or is it nothing, that means everything?‹ (Raoul Hausmann)

›Big-DADA or Dadacalypse or so‹ starts with a lecture featuring historical sound samples, and moves on to a presentation of the projects’ results, including a live performance and rrmmss dig gedae rep dep.

END_OF_DOCUMENT_TOKEN_TO_BE_REPLACED

Workshop ›Listening to the Environment‹
Peter Cusack, University of the Arts, London

As an introduction Peter Cusack gave an overview of his work in field recording and environmental sound, in particular the project Sounds from Dangerous Places that asks the question, ›What can we learn of damaged places, like the Chernobyl exclusion zone, by listening to their sounds?‹

END_OF_DOCUMENT_TOKEN_TO_BE_REPLACED

Curated by Arnau Horta is ON LISTENING, a new program by the radio of Barcelona’s Museum of Contemporary Art, MACBA. The first part of the series, Thinking (through) the ear, is a fascinating exploration of listening and sonic philosophy in the words of key contemporary thinkers, going around different issues which include phenomenological questions around listening, ideas on sound ontology and the possibilities of the sonic in terms of thinking, interpreting and perceiving.

It can be streamed online or downloaded at MACBA Radio. A supplementary PDF with info on the authors, bibliography and other resources, is also available for download.

END_OF_DOCUMENT_TOKEN_TO_BE_REPLACED

February 5, 2016 marks 100 years since the founding of the Cabaret Voltaire in Zurich, and thus the beginning of Dada. To mark the occasion, Cities and Memory: Dada Sounds applies the techniques and practices of Dada to field recordings from around the world. 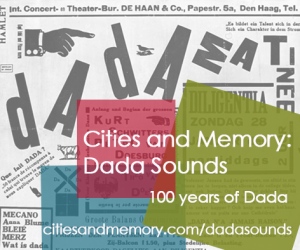 I also contributed one field recording and its corresponding Dadaist remix …according to Tristan Tzara’s method How to Make a Dadaist Poem.

Edit: I am glad to announce that the piece is now included on the Dada Sounds highlights album, available as a free download release at bandcamp.com.

END_OF_DOCUMENT_TOKEN_TO_BE_REPLACED

noises| signals is a sonic research project on signal and noise in the acoustic environment.

For the most part, scientific results are represented in abstract terms–like text, data or diagrams. In contrast, the course »Field Recordings« experimented with sound recordings as alternative media for research and representation. Drawing on Murray Schafer’s »soundscape«–with respect to more recent paradigms from sound studies and ethnography–students of European Media Studies investigated all the differing local qualities and features of the sonic environment, and compiled a corpus of »sonic documents«. The recordings were analysed and arranged to form a »sonic research report«, which keeps record both of the research process in the field as well as the characteristics of sound recordings as representational media in general.

END_OF_DOCUMENT_TOKEN_TO_BE_REPLACED

Sonic Places is a research project on the acoustic properties of different places. Students investigated and kept records of several sonic microcosms in and around Potsdam or Berlin. These materials have been further developed into a series of compositions, a corpus of »field studies« that can be listened to.

END_OF_DOCUMENT_TOKEN_TO_BE_REPLACED

Who is, indeed? Both a fervid apology of and a furious pamphlet for Murray Schafer, written by James Wyness last year. Still groovy!

›[The] visualist bias has dramatically influenced the way in which anthropology itself has evolved. Thus, one emergent and potentially very important aid to the refocusing of the discipline lies in attending to kinds of knowledge that have proved resistant to being coded in graphic or visual ways.‹ (Michael Herzfeld on the future of anthropology; Herzfeld 2002, 245)

Today, there is an increasing concern for the senses in the humanities. Some even venture to proclaim a ›sensory turn‹. In cultural anthropology, a greater awareness for sensory phenomena and embodied subjectivities, for materiality and atmospheres is reflected in approaches such as an ›anthropology of the senses‹ (Howes 1991) or a ›sensory ethnography‹ (Pink 2009). However, in today’s academic practice many scholars still appear to be utterly reluctant to go beyond text, images, or diagrams as a means of communicating knowledge–even when presenting research on the human sensoriality.

›Cultures of Auditory Knowledge–Knowledge of Auditory Praxis‹, an interdisciplinary conference held at the University of Music and Performing Arts Graz and the Karl Franzens University of Graz in June 2014, offered just the right setting to address and, indeed, transgress these representational conventions within an academic context. With a paper on ›Soundscapes and Ethnography. Field Recordings within Urban Studies‹ I did not try to construct another theory on sound in the city. Rather, I aimed to allow for some first-hand experiences, or at least to provide some ›sensory material‹ by presenting a composed sequence of recordings from the field.

Listening to this sound sample is an experiment you can partake of: Can these recordings actually convey a ›sense of place‹ (Feld/Basso 2009)? Do they reveal something about the people living here, about the atmosphere and mood of this particular ›sonic lifeworld‹?

END_OF_DOCUMENT_TOKEN_TO_BE_REPLACED

›The act of walking is to the urban system what the speech act is to language. It is a process of appropriation of the topographical system on the part of the pedestrian (just as the speaker appropriates and takes on the language); it is a spatial acting-out of the place (just as the speech act is an acoustic acting-out of language).‹ (Michel de Certeau)

›Walking in the City. Hidden Sounds and Mobile Places‹ is a sound art installation in public space, accessible via a customised smartphone app. Listeners are invited to explore and appropriate an area of hidden sounds–and to compose their own radio play by walking.

END_OF_DOCUMENT_TOKEN_TO_BE_REPLACED

›Inside every room of every house of a street, each of them full of audible details, usually concealed behind closed doors: if it would be possible to listen to these everyday choreographies, what could you hear?‹

This experimental project called Berlin Ackerstraße (2006-2007) takes you on a participant observation or rather, a participatory sound expedition in Berlin, Ackerstraße. It enables you to listen to the sounds of everyday life in Ackerstraße five years ago – while walking down the street today. 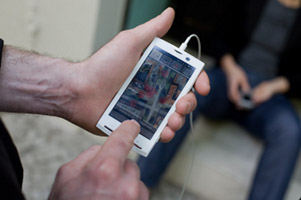 Miniatures for mobiles is an app which responds to your movements: you are literally composing by walking. You are wandering around in a radio play.

END_OF_DOCUMENT_TOKEN_TO_BE_REPLACED

researching music-making in Wellington and Copenhagen